At 01:09 the Kingwood Township Vol. Fire Company No. 1, the Kingwood Township Vol. Rescue Squad, Frenchtown Fire Department and the Lebanon Township Vol. Fire Company were dispatched to a structure fire on Creek Road. Chief Frank Floyd assumed command at the scene, confirmed a fire in an outbuilding with extension to two nearby surrounding buildings. Engine 16-64 piloted by Lt. Narbonne was the first engine in the driveway and took to fire suppression activities. Deputy Chief Jim Drake was in charge of Operations and quickly had the engine crew knock down the fire to prevent any further extension to the nearby buildings. A second 18 x 12 2 story outbuilding containing fertilizer and weed prevention chemicals became involved on the upper half of the building. Engine 11-61 was the second engine up the driveway. While navigating a tight turn the Engine went off the paved steep driveway and became stuck in the mud caused by the recent rains. FireFighters from Kingwood and Frenchtown assist in stretching 500' of 5 inch down the driveway. Engine 16-61 with Captain Hanley running the engine connected to the 5inch and became the supply engine. Tender 16-71 with Gary Lezak at the helm nurse feed Engine 16-61 to maintain the continuous water flow. In all approximately 4750 gallons of water were utilized to fight the fire and ensure the rubble of the initial shed were fully doused. Many thanks go out to Chief Saharic and his crews from Lebanon Vol. Fire Company for providing a RIT team and ladder truck. A big thank you goes out to our partners in the Kingwood Township Vol. Rescue squad for providing rehab and ensuring the crews were well hydrated. 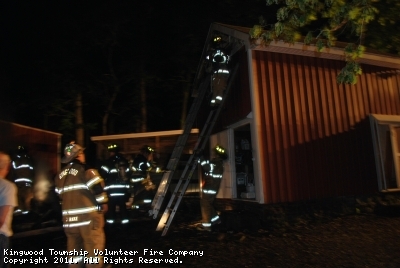 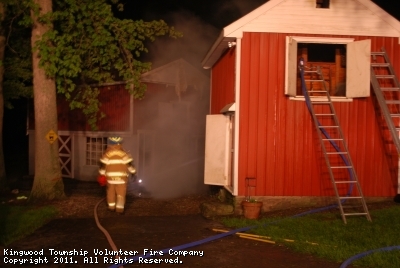 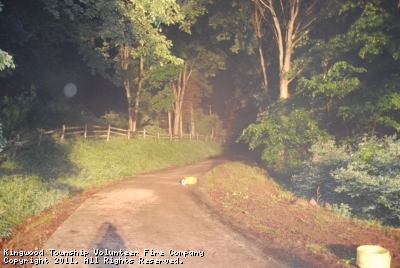 Rolls of 5inch to pick up later. 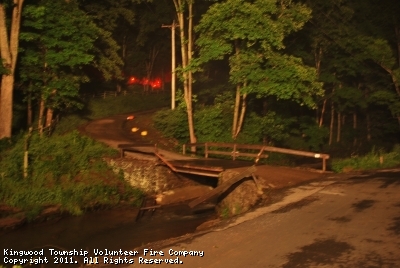 Bridge proved to be tricky to navigate for many 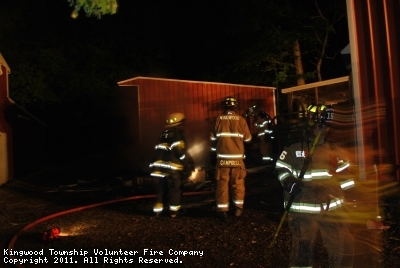 Lt. Campbell checking the remains of the 8x10 shed that was involved in the fire 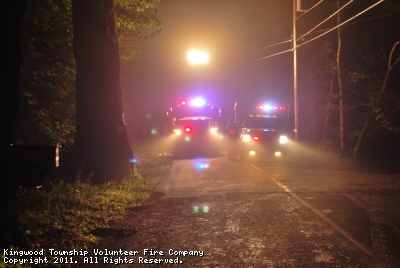 This site has been viewed 240,433 times.
Calls
News
Events
Pictures
Apparatus
Maintained by the members and staff of Kingwood Township Volunteer Fire Company. Designated trademarks and brands are the property of their respective owners. Copyright © 2006-2022. YourFirstDue Inc. All Rights Reserved. Content on this web site is supplied by Kingwood Township Volunteer Fire Company. YourFirstDue Inc. cannot be held responsible or liable for any content, text, pictures, or any other media found on this web site.
Management login
Powered by